Neighbors gathered on October 27, 2018 for a beautification project sponsored by the Leimert Park Garden Tour. Leimert Park Beat was on the scene! Read the story here. 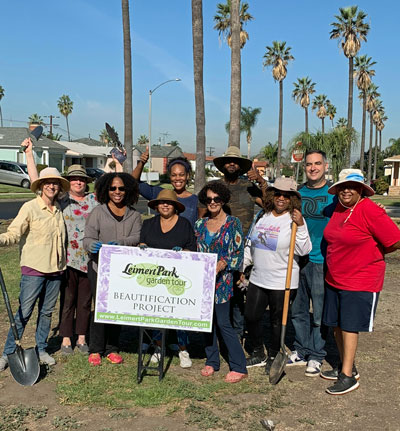 Lark Galloway-Gilliam, a beloved community advocate, passed away in December of 2014. She is greatly missed. Amongst many accomplishments, she was the founder of the Community Health Councils,  a non-profit, community-based health education and policy organization.

What she was fighting and advocating for was not something she wanted so much as what the community deserved.—Romel Pascual, a former Los Angeles deputy mayor of energy and environment

On Tuesday, July 12, 2011, CLBC members Bill Webb and Cheryl Key had the honor of interviewing Brad Pye Jr.  We were spellbound as he recounted the events of his fascinating life.

Brad Pye was born on June 11, 1931 in Plain Dealing, Louisiana, which had a population of 100.  Growing up in Plain Dealing, Brad always dreamed of a better life.  Mr. Pye shared a humorous story with us.  As a kid he and friends had fun watching the town’s lone street signal change from red to yellow to green and back again.

Brad Pye came to Los Angeles at age 12.  Needing money, he was lured here to work in a gas station. Brad was on his own and was thankful to all the non-family members that helped him along the way.

His interest in journalism manifested itself when, as a student, he was a janitor at Elks Auditorium, which was next to the Pittsburg Courier.  He had an opportunity to read newspapers from all over the world.  Also at Jefferson High School, he interviewed students and wrote poetry for the school newspaper. Here he became fascinated with the printing presses.  This was the beginning of a long and illustrious career in journalism.

During his distingushed career, he was a Los Angeles Sentinel sports editor for 30 years, and sports director for KGFJ, KJLH, KACE and KDAY radio stations.  Additionally, he was a sports columnist for L.A. Watts Times, Compton Bulletin, Inglewood Today and Inland News.

He worked tirelessly over the years to publicize Afro-American athletes through his newspaper columns and radio commentaries which included his infamous signature “Switch Reels” comment.

Brad began his Los Angeles County employment in1987 as the Chief Deputy to former County Supervisor, Kenneth Hahn. In 1993, Pye transferred to Department of Children and Family Services as Division Chief.  In this capacity he served as the Disabilities Act Coordinator, managed the Disaster Services, and directed the Exams/Recruitment Section.  He retired from the county in March 2011.

Mr. Pye has served for many years on the California State Athletic, the Los Angeles Coliseum, and the Los Angeles City Recreation and Parks commissions.  He also serves on the board of trustees of Brookings Community A.M.E. Church.

He is married to Eunice and has four children, Jan, Jenice, Jill, and son, Brad Pye III.